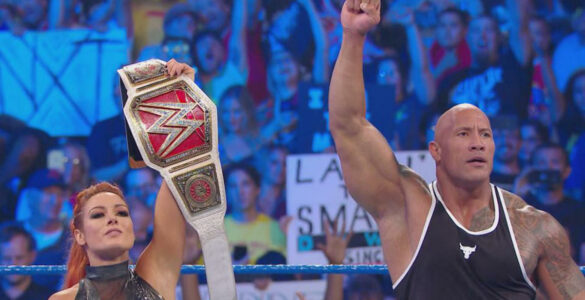 What you need to know: Never in my wildest dreams did I ever think the WWE would be treated as a mainstream product. Their deal with Fox means that sports entertainment and traditional sports will be linked at the hip for the foreseeable future.

The Rock: The segment disappointed overall, but it is ALWAYS special to see the Rock in a WWE ring. Becky got a good rub from it as well.

Ladder match: I thought this was the highlight of the show. Killer spots by Owens and Shane. They told a good story with a satisfying ending. I’ve had my issues with the way this feud weakened Owen’s character, but all’s well that ends well. I hope.

Strowman vs Fury: Vince eats this shit up. The interaction made mainstream media headlines which is the oxygen Vince breathes. I’ve never been a fan of it myself but I suppose it serves a purpose. I certainly prefer this over the combat fighter interaction we got at the end of the show.

Just another show: Despite all the hype, the Rock and a cast of lesser stars: This show didn’t feel big. At best it was an anniversary type show not the start of a new era on a national network.

Women’s tag match: We’ve seen this match recently on a regular episode, why on earth do we need to see it yet again? As much as I love all four of these horsewomen, the match came off as a stale tribute or payoff for the past.

Kofi gets squashed: Jesus Freakin Christ! A five-second squash. After all the momentum, all the time invested in Kofi’s run since the elimination chamber and we get a 5-second squash? It’s obvious the powers that be didn’t learn the lessons of Kofi Mania. The worst part of all of this is that Valesquez could’ve been introduced without having Kofi lose at all much less in five seconds. The result of the match has led me to strongly consider taking a break from WWE.

Bottom line: This wasn’t a good show. It wasn’t horrible but it wasn’t good either. I can only hope that WWE creative has a more clear direction for Smackdown in the future