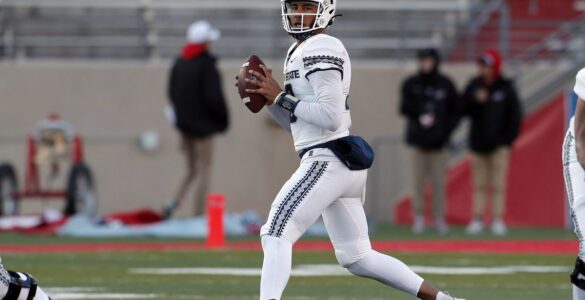 Love has the arm talent to make any throws. He’s a good athlete who is able to extend plays and throw on the move as well as run.

He has a nice set and a fluid delivery. Able to throw from a variety of throwing platforms and arm angles. When his feet are set the ball jumps out of his hand, you really see it on drive throws across the middle of the field. He seems to be always aware of his check downs. His ball placement can be very impressive at times.

The only thing that’s consistently about his game is that his decision making is inconsistent. Head scratching throws and choices. Sometimes he relies too heavily on his arm and sometimes the choices defy explanation. He won’t give up on a play to fault and will force the ball into crowds.

Technically, he doesn’t climb the pocket enough and when he does, he tends to not reset his feet. He lacks an overall sense of field vision and awareness and his internal clock is broken. He doesn’t recognize coverage disguises post snap. Too heavily reliant on his arm, he will go for the deep ball instead taking the easy pass. Generally speaking his accuracy can be scattershot. He panics under pressure.(49.4 PFF grade)

Bottom line: His evaluation is reminiscent of Josh Allen’s from a few years back. He has so many amazing traits and moments and just as many disastrous ones. The way you feel about an inconsistent QB with extreme highs and lows will inform your evaluation of love. I’m not high on players like this. Allen is serviceable for the Bills when surrounded by a strong running game and defense but one could make an argument that he’s also holding the team. I think Allen’s pefromance in Buffalo this past year is Love’s ceiling.