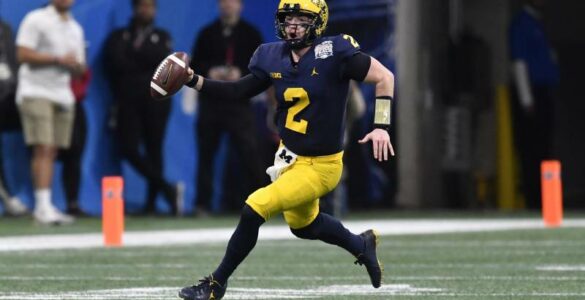 What you need to know: Patterson was one of the most sought after QB recruits in the 2016 class. Patterson fizzled out at Ole Miss and subsequently transferred to the University of Michigan where he again failed to live up to lofty expectations.

Patterson is a very talented athlete who occasionally shows glimpses of the potential that recruiting services saw in him to be the number one ranked QB in his class. If he has time to set his feet-particularly on play action shot plays- he can throw a nice deep ball or fit the ball into tight windows.

If he is confident and knows his presnap read he fires the ball in accurately with his quick release. He’s a good athlete who was frequently used in designed running plays, he’s a good decision maker in the read option/zone read game. He’s also able to make plays outside of structure with his feet;scrambling to pass or flat out running for yardage.

If he’s able to set his feet properly he can make some wow throws but it’s not consistent. A fair and total evaluation of his arm talent concludes that he has an average arm at best. He will put way tooo much arm on his deep balls and his wrs frequently have to over adjust on any throw that’s deep to intermediate.

He’s flat out terrible against pressure.(39.0 PFF pressure grade) His presnap game could use a lot of work. He does a poor job of seeing blitzes coming, rarely audibles in to the right play or changes pace due to the pressure, there are times where he invites it.

Overall he’s a bad decision maker. He’s too easily flustered and willing to put the ball in harm’s way to try to make a big play. His lack of patience an poise is a big reason why he’s such a frustrating and inconsistent player.

Player Comparison: Tough to compare him to anyone. The only thing I can think of is a very poor man’s Russell Wilson.

Bottom line: If you put together a highlight reel of his best plays he’d be one of the top prospects in the draft. When you watch his games live, it’s amazing how underwhelming he can be. His big plays seem too late,inconsequential or against inferior competition. I don’t see him as more than a low end starter. More than likely he’s a serviceable backup.