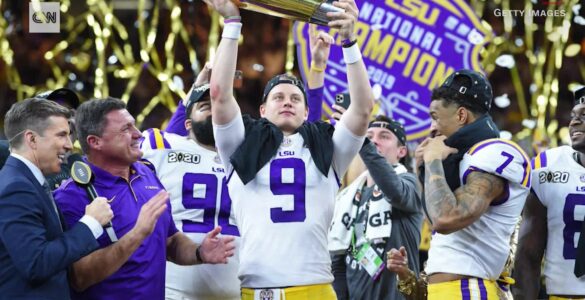 What you need to know: From afterthought on the Ohio State depth chart to the Heisman, the National Title and the consensus number one overall pick, Burrow is a modern day rags to riches tale.

What I liked: Burrow is a smooth rhythm and timing qb who perfectly reads defenses and throws a very catchable ball with pin point accuracy. He’s never in a rush to get through his progression and displays and poise at all times. Seems as if he has a sixth sense to know when the pass rush is coming. Comes off as very cerebral and polished. An unnatural confidence that borders on cocky, his teammates seem eager for him to lead them into battle. Throws a beautiful deep ball.( 55% 24 TDs and 2 INTs in 2019) Allowed his talented wide outs to go up and make plays, especially on back shoulder plays. Always seemed a step ahead of the defense. One of the biggest one year improvements in the history of sports much less college football.

Burrow is very effective escaping pressure. He also keeps his eyes downfield to make plays when he does flee the pocket. If he has to he will flat out run to gain extra yards. He’s very smart about protecting the ball and his body when he’s on the move.

What I didnt: The universal knock on Joe is his arm strength or lack thereof. I truly don’t believe it will be an issue. He doesn’t have a cannon but he’s got more than enough to get the job done. His anticipation skills can camouflage a lot of the arm issues. However there is growing concern about his accuracy at the intermediate level-outside the numbers.

Another concern has to be that Burrow is a one hit wonder. It’s an amazing story but is he more Buster Douglas or Rocky Balboa? Buster was a one time, one night thing, Rocky went on to become a legend. Is Burrow system dependent? The question has to be asked when he spent most of his college career riding the pine and even last year he didn’t stand out.

Player comparisons: A lot of people like the Romo comp. I don’t see it. Romo was more improvisational and more prone to mistakes. Joe Montana is a much better comparison. Ok relax. in no way am I saying that Burrow will have the same success or career as Joe cool. However it’s impossible to ignore styles. In terms of accuracy and “throwing a catchable ball the similarities are eerie. Also the amount of calm that both men display in pressure packed situations is also very similar. On the low end of things he could be a system quarterback like Dalton or a guy who never gets surrounded with enough to success like Ryan Tanehill(until this year)

Bottom Line: If Burrow was going to any team besides the Bengals I would be sure of his future. The dysfunction of a franchise has a lot to do with the success of a quarterback. To solidly project Burrow’s fate in the NFL I’d look at him as something of an Andy Dalton type(in terms of success) but perhaps I’m underestimating him just like has been done his entire career, I’m pretty sure that’s the way he likes it.