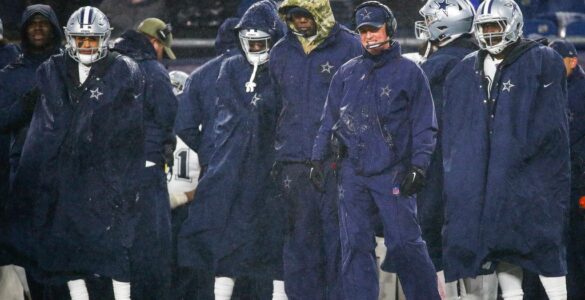 Jason Garrett never disappoints. We knew he’d be outcoached by the hoodie but he didn’t have to make it easy. Garrett is a conservative coach by nature but after an afternoon of failing to reach the endzone, he decided to kick a field goal deep in Patriots territory with 6:08 left in the game.

The decision was cowardly and the typical play not to lose style Garrett is widely known for. Many Cowboy fans will point to a horrible tripping call on the final drive of the game. Unfortunately for Jason, it doesn’t appear his owner is one of those people.

I am the one who knocks Award

There’s been ample reason to doubt the 49ers. They jumped out to an 8-0 record on the back of a light schedule. When they were met with their biggest challenge on Monday Night Football. The Seahawks came out on top in a thriller. To exacerbate things they had to rally to beat the upstart Cardinals after trailing 17-0 early.

Sunday night the Niners proved that they are the true danger in the NFC, with a suffocating performance against Aaron Rodgers and the Packers. San Francisco’s pass rush, led by Arik Armstead (two sacks, four QB hits), Nick Bosa (one sack) harassed Rodgers all night allowing him zero opportunity to work his customary magic. The Niners upcoming schedule is the hardest in the league but this win showed that they are more than ready for the challenge.

It was inevitable that Ryan Tannehill would get the starting job over Marcus Mariota this season. Barring a breakout season from Mariota, the Titans were certainly going to check under the hood and see what the former dolphins signal caller had to offer.

Tannehill has exploded onto the scene leading the Titans to wins in 4 out of their last 5 games. The Titan’s offense has exploded with Tannehill under center averaging 13.1 more points per game under and 93.9 more yards per game.

Who knows how long it will last but for now we all need to say Ryan Tanehill’s name.