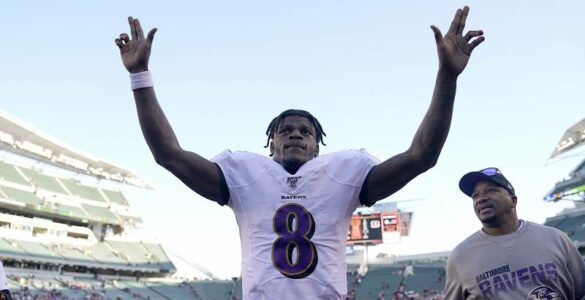 I am the danger award: Lamar Jackson

For the second time in his short career, Lamar Jackson posted a perfect quarterback rating. He also posted the highest QBR of any QB this season at 99.7 Sure it was against the Bengals, but Lamar did what you’re supposed to do to against bad team. Further cementing his name in the MVP conversation.

Mitch fooled us all. For at week at least. .Perhaps it was going zero dark thirty. Mitchell played his best game of the year.(78.6 PFF score) I wouldn’t bet on Mitch long term but for one Sunday he put his naysayers to rest.

You and your pride and your ego! If you’d done your job and known your place, we’d all be fine award: Jason Garrett/Kellen Moore

As a Cowboy fan I find myself firmly in the Jason Garrett takes over and calls bad plays conspiracy theory camp. Tongue firmly implanted in cheek but there is no way that the innovated wunderkind known as Kellen Moore would ever display the unimaginative play calling the boys do at times. The only possible answer is that Garrett takes the wheel at times.

In the most frustrating sequence of the season someone decided to run Zeke two times in a row with the game on the line. Zeke may be old reliable(less and less so) but Dak almost threw for 400 yards passing and Amari Cooper and Randall Cobb had over 100 yards receiving. Why go away from what was working?? Stubbornness? Lack of imagination? Outright stupidity?

You like that!! Cousins surely does. I wouldn’t it as getting the monkey off his back but it’s an improvement. With last Night’s victory over the Cowboys Cousins

The Vikings, over two seasons with Cousins as their quarterback, are now 3-9-1 against winning teams, including 1-7-1 on the road.