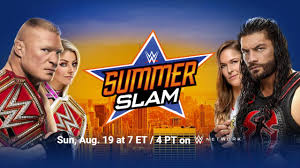 SummerSlam 2018 is a wrap. The card pleasantly exceeded expectations providing solid action within the matches and for the most part, provided satisfying endings.

2. The stories and character motivations made sense: From Becky Lynch’s heel turn-which was glorious and may have gotten the biggest pop of the night) to AJ’s disqualification after Joe took things way too far. Characters acted in a natural and uncontrived way based on who they have been build to be. Also, Joe’s line about becoming Wendy’s daddy rivaled Becky’s heel moment for the biggest pop.

3. Devaluation of talent: Kevin Owens and Alex Bliss were essentially squashed on the second biggest show of the year. WWE ought to think long and hard how it treats fantastic workers like these two.

4. WWE is beyond all in with Rousey: Vince clearly wants Ronda to be his female Brock Lesnar and he’s willing to shit on anyone-including male talent to do it. Rousey toyed with a woman who has either been the champion on Smackdown or Raw for the better part of a year. The only person this benefits is Rousey. So maybe it all leads to a Wrestlemania main event with Charlotte Flair. However long term they are making her so strong that no woman can possibly compete. How is that good for the women’s division in the end? Especially with her history, it’s hard to believe that Rousey is long for the WWE.

5. The main event was smoke and mirrors: Basically Brock and Roman had the same match they always have. Only this time Bruan Strowman was on the outside. For a moment I was impressed that we were getting a new wrinkle in this very tired saga but when Braun stayed on the outside I realized that we were given the ookie doke. I guess we all must be dragged kicking screaming into the Roman Reigns era.

No comments yet Categories: IB SPORTS
← This is America: Breaking down the depth and symbolism
Feminism and the WWE’s Women’s Revolution →