The Curious Case of Lamar Jackson 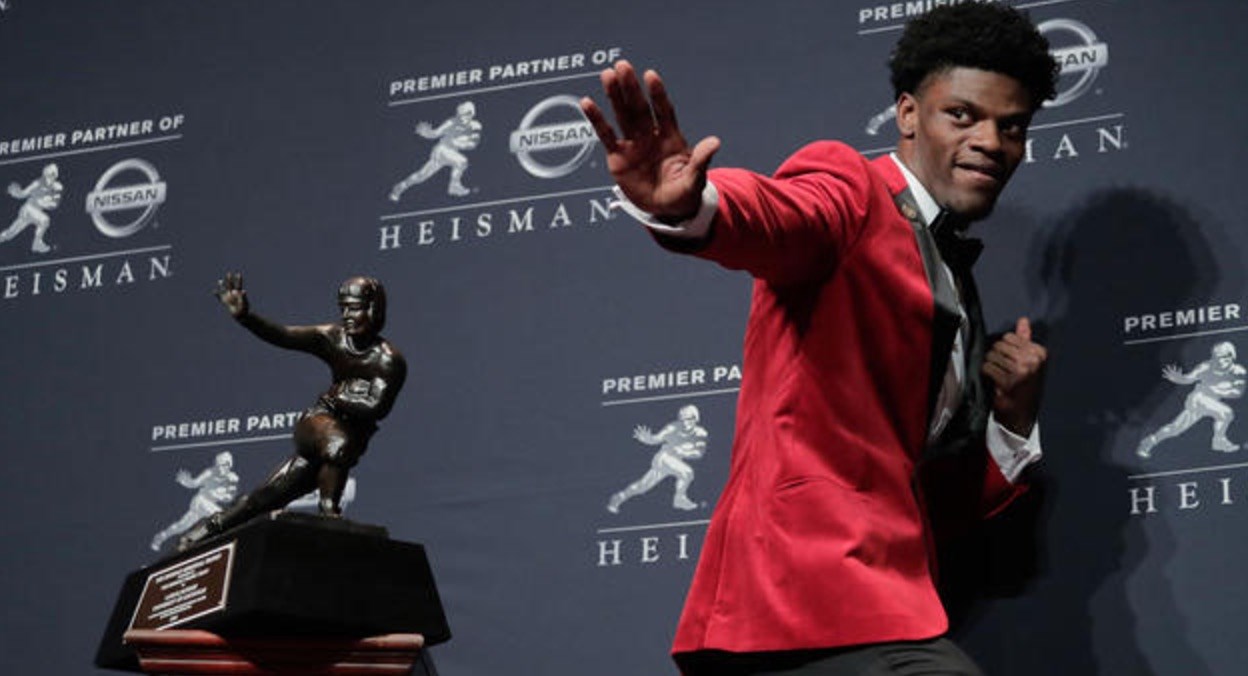 Imagine you’re in the year 2018 and you awaken tied to a chair in a dimly lit room.  In comes Chris Mortensen dressed as Morpheus and he says, “what if I told you that a quarterback coming out of college who was statistically better than Michael Vick, Cam Newton, Russell Wilson,  Teddy Bridgewater, Tyrod Taylor, Robert Griffin III,  and just about every dual threat QB in the last decade was asked to play wide receiver?”  Okay, so maybe that was an exaggeration because according to Lamar nobody actually asked him to consider switching to the wide out position.  Interestingly enough he still opted not to run his 40 time with some (myself included) thinking that he did not want to let people know how fast he was just to squash any thoughts of a potential position switch.   Some people think that this a racial thing  but I just named 6 Wakandians who were accomplished collegiate players with the ability to move when needed. These specific players  were also not asked by anybody to switch positions and by and large the idea among fans would have been considered ridiculous.   So why do people think that Lamar can not play the QB position at the next level?

Because people are silly that’s why……

That’s how Michael described Lamar.  We have all seen the incredible play-making ability by the 2016 Heismen winner.  We are all aware of his blistering pace statistically while at Louisville and a few of us are aware of his progress as a passer.  For my evaluation I did not look at his 2016 season.  Unfortunately time would not allow me to do two-three years worth of analysis and to me he is not the same player he used to be in 2016 so I took the liberty of just analyzing the current form and in my opinion Lamar can not only play at the next level  but, if given the proper guidance he can find success.  Lamar displayed a ton of play-making potential so it’s only right that I highlight both his running and his passing ability from 2017.  I put more focus on the passing because that is the area that his critics think will keep him from a successful NFL career.

I wanted to see Lamar at his best and at his worst  last year.  So I started from the very beginning with the Purdue game to establish a base of expectations and an idea of what to look for as the season progressed and he continued to develop.  The one thing that stands out through the entirety of the season for Louisville is the big play potential that Lamar brings every down.  Whether it’s gunning the ball 55 yards or using his legs to fly by defenders, Lamar has the athleticism that keeps you on the edge of your seat virtually every snap.

The commentators referenced Michael Vick a lot when talking about Lamar Jackson’s ability to elude the pass rush.  He is very slippery in the pocket and when he decides to run rarely was he brought down in the backfield.  I have seen a lot of Lamar highlights but every time he tucks the ball to run I can’t help but be amazed that a quarterback has such vision and open field moves with the ball in his hands.  We’ve seen playmakers a plenty under center in the last 25 years but I don’t know if we’ve seen the type of open field ability from the quarterback position as we’ve seen from Lamar.  The main thing that stands out from all his running is his acceleration.  His stop to start time on his runs from the pocket are second to none and even on a lot of plays where he should be tackled for a loss, Lamar is able to get a couple yards or at least back to the line of scrimmage.  The speed and acceleration is something to take notice of as he moves up to the next level.  In this regard I don’t think we will say too much drop off from Lamar.  He will still be able to out run most rushers and still break down most would be tacklers in the open field.

Last year Lamar showed the ability to climb the pocket  and the poise to complete throws under duress.  A lot of times we see athletes such as Lamar just take off running under the first sign of the pocket collapsing.  After watching the games from 2017 I did not get that impression from him.  And even though he is an elite athlete the offense for Louisville remained as balance as humanely possible.  Sadly I did not get to really evaluate the Louisville offense like I wanted to but it doesn’t take John Madden to tell you that they somewhat catered their offense to the RPO ( Run, Pass, Option) and Lamar’s play-making ability however they also surprisingly stayed true to pro sets more often than not.    Statistically speaking 2017 was almost on par with his 2016 Heismen year.  He threw for slightly more yards, had a few more attempts and a few less touchdowns.   I’ll just get to the point and say that Lamar will struggle in the NFL with his passing.  He’s extremely inaccurate even though the percentage is closer to 60%

I attribute that to some incredible catching from some brave souls on the Cardinals roster.  Mechanically Lamar leaves something to be desired from me.  I don’t like how he uses his lower body ( he doesn’t really) on his throws.  I don’t like how he has a habit of not stepping towards his throws sometimes electing to stay square and just throwing the ball.  I also do not like how he doesn’t use his hips on a lot of his deep passes.  Now I could be over analyzing but these two things really have a negative effect on his ball placement and consistency in the passing game.

Lamar also struggles at times while on the move and throwing I think due in part to his lack of familiarity with using his lower body on throws. Again ball placement is awful unpredictable. Here he completely misses an open receiver running towards his side

I don’t expect Lamar to throw with the mechanics of a Peyton Manning but the lack of lower body involvement makes him sporadic and honestly disappointed me.

Taking all things into consideration I believe Lamar Jackson can be a successful NFL quarterback.  Given his stats and accolades many people might get mad at the label but he still is very much a project in the NFL.  The reason why I say that is because Lamar is still a very under developed passer.  I see the potential based on his 2016 season and then his 2017 season.

Lamar shows poise under pressure and fires a touchdown

He made great strides as a passer but there are still many red flags to his aerial game.  I have already touched on his mechanics a little  but to be more specific, Lamar likes to keep his weight on his back foot and does not step to where he wants to throw the ball a lot of times.  There were times where he would literally square up and throw the ball.  He’s able to do that because he throws with a quick flick of the wrist but with his feet being so close he can’t control the trajectory of his passes.  Throws that are outside of the numbers and even down field tend to be overthrown more often than not leaving receivers exposed to big hits or making it tough for them to catch and turn up field.  He does not excel at throwing people open versus the zone unless it’s deep downfield and he’s very slow to anticipate openings against the zone which sometimes leads to him throwing balls that honestly should have been intercepted.  His inaccuracy makes him a wild card versus man to man coverage but his arm strength is enough to scare a secondary when he is placing the ball in the right spots.  And it’s important to note that he can and has shown the ability to do just that in his tenure at Louisville.  While Lamar showed strides in pocket awareness I’m still going to knock him a little for being indecisive and slow to recognize coverage mismatches. His offensive line wasn’t very good last year but he was impatient with clean pockets more often than not and had a tendency to hold the ball too long after he climbed the pocket and would eventually take unnecessary loss of yards.

Again Lamar is slow to recognize the open man this time versus zone coverage. The spacing concept on the left side was the perfect call and he has his man open but lacks the recognition and anticipation to make the necessary throw

With all that having been said I personally do not see why Lamar can not play at the NFL level.  Everything that I considered a flaw can be fixed with coaching, practice and experience.  He is by far the most athletic quarterback in this draft and as capable a passer as most of the dual threat prospects who have come before him in my opinion.  So give the kid a shot but I wouldn’t draft him with a 1st or 2nd round pick.

NFL Level throw by Lamar. Something he can do just not as consistent as it could be with better mechanics

strengths: elite athlete, durable despite carrying the ball a lot, quick release on the football

weaknesses: dangerously inaccurate, slow to anticipate receivers getting open, too quick to quit on progressions

Be on the lookout for the rest of my breakdowns on some of the more interesting quarteback prospects of the draft.  I am willing to take request as well for anybody not considered a top 10 prospect for the position.

(Shout out to Samuel R Gold for good breakdown video and play animation.  Also shout out to my son for eating my notes and making me go back over the videos more thoroughly)

No comments yet Categories: Draft, Uncategorized
← NFL Combine 2018:Show me the money
Jessica Jones premiere recap: ‘AKA Start at the Beginning’ →